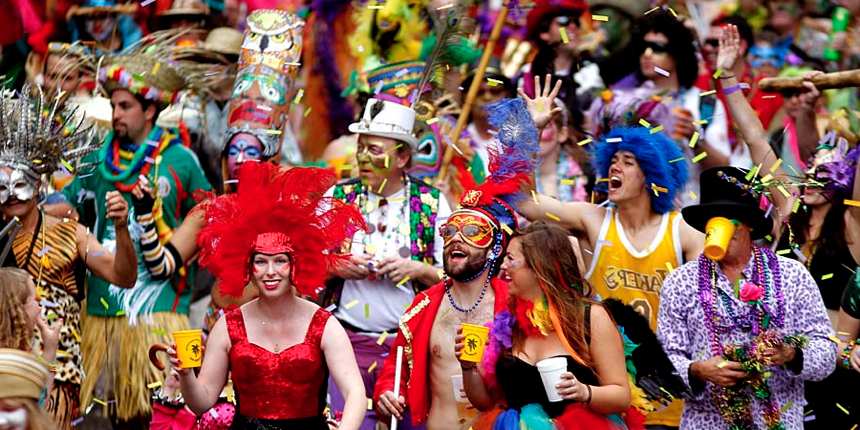 Fancy dress at university or college is a right of passage, helping to break down any barriers between you and your peers. No-one is going to look good, however much you think you’ll look like Jonny Depp or Marilyn Monroe at the end of the night. There’s no need to despair though as we’ve put together our top student fancy dress ideas on a budget, making sure you’ve got cash left over for a hangover breakfast the following morning.

Yes it is an old one but it is a classic, with just about anyone being able to pull this off just from digging out some old school clothes. Squeeze into that white shirt or head down to Primark to pick up a new one for a couple of quid. You then just need to pair it up with shorts/trousers/a skirt, together with that old school tie. Most university towns have tons of charity shops where you can pick up old ties if you’ve thrown yours out.
Add on some freckles with a non-permanent marker (don’t trust your friends with this one!) plus some geeky glasses if you want to accessorize the outfit further. The total cost of the school disco student fancy dress outfit shouldn’t be more than £10, even if you have to buy everything from scratch.

Another perfect student fancy dress idea for anyone on a tight budget, as it’s unlikely you’ll have to buy much for it, compared to something like a pirate outfit. Hunt down the most horrendous shirt you can find or raid your parents wardrobes – trust me they’ll be one tucked away somewhere. Then it’s just a case of teaming this up with some swimwear, together with your sunglasses and an inflatable toy. You’ll pick up beach balls, armbands or rubber rings for a few pounds at a local toy store – all of which will bring you hours of entertainment as you try to move around a packed venue. They’re also a great conversation starter, but be prepared to lose them by the end of the night.
If you want to take this to the next level, dress up as a lifeguard by finding everything red that you own. You can make your own paddle float from cardboard and take a whistle for extra effect together with some sun block on your face. It’s highly likely the Baywatch theme tune will be played at some point if it’s specifically a fancy dress event, at which point you’ll come into your element.

This student fancy dress idea works perfectly for any doctors and nurses theme nights and will make sure you stand out from the crowd. Where most students will be going with the standard white lab coats and a stethoscope, you’ll be one of the patients. It’s a cheap costume as all you need to do is rip up some old clothes, such as slashes across the arms. Add in some fake blood both on your skin and around the area you cut, together with a few splatters across the front of the top. You can add further impact by adding a head bandage, which can be made from a strip of an old white pillow case.
If you’re looking to go all out with the fancy dress, try and hunt down some old crutches or a walking stick – just be warned that some venues may not let you take wooden sticks inside for obvious reasons. You can then spend the night being treated by the doctor or nurse you’ve got your eye on.

Tips on saving more with these student fancy dress ideas

Rather than going straight out and buying a ready-made costume, make your own with what you’ve already got as it’ll save you a fortune. Most outfits cost around £30 and if you end up buying a few each term, you’ll be out of pocket before you know it when all of your mates still have cash for a few more nights out. You should only use fancy dress stores to pick up accessories to add the final touches, whether it’s fake blood for your accident victim costume, or a fake inflatable palm tree for the beach party theme.
Every time you head out to a random fancy dress night, share the different costumes around the people in your halls or student house. By doing this you won’t have to go out and buy bits each time and you’ll all be going as something different. Most people will also add further pieces to the costumes and after a few weeks, they’ll all be looking amazing.
Our final tip is to work with what you’ve already got. If you look like a famous person, then go as that celebrity by picking an outfit they’re often seen in. Likewise if you have a lanky friend, why not go as someone like Delboy and Rodney as people will instantly be able to recognize the duo.