How much you can save with LED light bulbs 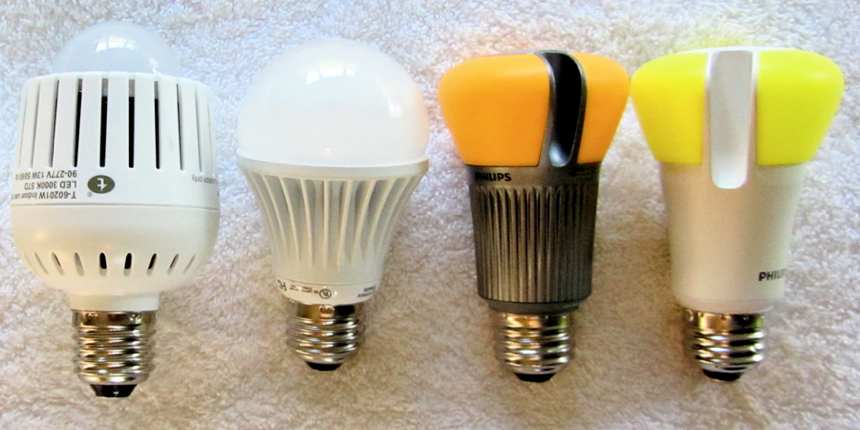 Energy saving light bulbs have been around for years yet many of us are often put off by poor light given off by some, together with the aesthetics. This is where LED light bulbs differ, as they offer a more elegant alternative, together with providing substantial cost savings to help cut down your electricity bill. We’ve put together this simple guide so that you see what the savings are, together with the costs involved of upgrading.

What are LED light bulbs?

LED stands for light-emitting diode and uses far less energy than typical halogen bulbs and some standard ‘energy saving’ bulbs on the market. They are much more efficient at transforming the power passed through (electricity) into light, which means that the wattage is far lower. Typically they use just 4W, compared to 35W for halogens which is a huge reduction of around nearly 90%. With advancements in technology, they’re available in a variety of colours and it’s often hard to tell the difference if you go for a softer yellow glow. Traditionally seen in the kitchen for spotlights, they’re now starting to become more main-stream and some companies are working on LED replacements for the traditional light bulbs around the home used with pendant fittings.

What are the cost savings with LED light bulbs?

This is almost like answering the question of how long a piece of string is, as it’s heavily dependent on your usage. As a rule of thumb, the cost saving is around 90% on your energy bills for any light bulbs you replace. Therefore based on the standard usage of 2.7 hours a day, you’d pay just over £7 per year for each halogen bulb and just under 60p for each LED light bulb. This may not sound like a huge sum, but it quickly adds up if you have a lot of bulbs (especially spot lights). With just 20 bulbs changed you’d be saving around £130 each year so over a 10 year life-span of the LED bulbs it could save you well over £1,300. With the average electricity bill for lighting alone at £300 per year, you could save around £270 per year if all bulbs (or at least the majority) were replaced.
As well as the monetary cost savings with LED lighting, there’s also the additional eco advantage as far less power is required.  Therefore you can feel happy that you’re also doing your bit for the environment without it affecting your lifestyle or feel of your home.

How expensive are LED bulbs to buy?

LED light bulbs aren’t cheap, but prices have been dropping steadily and they now cost around 5 times that of equivalent halogen bulbs. With the cost savings they offer, the payback time is just over a year. The lifetime is around 10 times longer at 10,000 hours compared to 1,000, which means overall an initial investment is required but you will get it back quickly.
Be prepared though for the initial costs as you’re likely to need to pay over £6 per LED bulb so the best time to make the switch is during any home renovation works. For example, if you’re getting your kitchen replaced insist that the new lighting uses LED light bulbs so that you can absorb part of the investment in the project cost. Likewise, if you’re moving into a new build ensure that the spot lights are LEDs as it’s likely you won’t have to replace them for at least 10 years.

Where you can buy LED lighting

Most of the large DIY retailers like Screwfix now sell LED light bulbs, together with LED downlighters and under-cabinet lighting. You’ll also find some online specialist online retailers such as LED Hut that tend to offer a much bigger selection. Make sure you read reviews, together with the specifications on each LED bulb or unit as some may not provide dimming as an option or will require additional transformers.