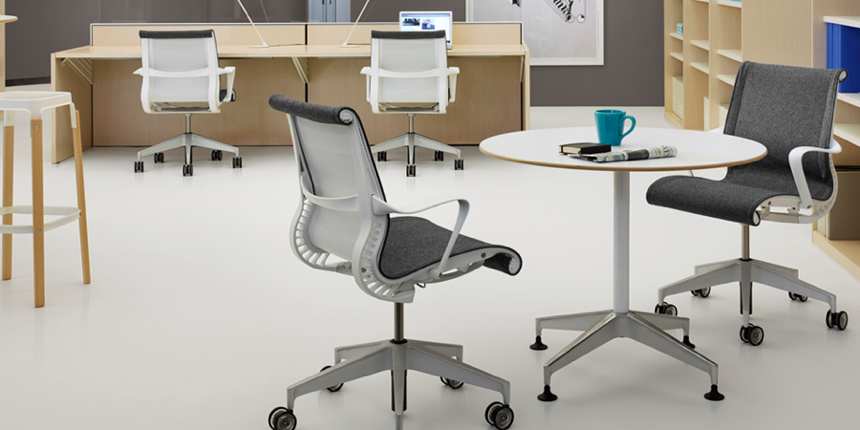 Some background about the Herman Miller Setu Task Chair

It all started with an idea by German design team Studio 7.5 to produce a chair that would automatically shape around your contours. Up until now, many ergonomic chairs took ages to get just right for your seating position, constantly tweaking levers and reading the setup guides to make sure you got it right. Anyone else using the chair would then make their own adjustments, making the process an ongoing saga for the pursuit of a comfortable seating position. The Setu Task Chair aimed to overcome this obstacle but it didn’t happen quickly and 35 prototypes were produced before the team was happy with it.
During this time, Studio 7.5 teamed up with the widely acclaimed Herman Miller, known for holding licenses for some of the most inspiration designs in the world.  These include the likes of Eames and Noguchi, both of which are seen in homes and offices across the country and continuing to rise in popularity due to the timeless designs of the chairs and coffee tables. With this backing, the small design team was supported until the project was completed and there are now thousands of people around the world very happy that it was.

The Setu Task Chair can be bought in set colours from larger retailers like John Lewis, however many companies provide the opportunity to customize it to your preferences. This enables you to select the colour of the arms, spine and mesh fabric, together with the metal base and even what castors you’d like. It’s great if you’re looking to add some colour to your home or only want to use a couple of colours  and is the option I opted for, getting the chair produced in a light grey mesh with white arms.
The first thing you’ll notice about the chair is the spine it has running down the back, mimicking a human spine. It looks rather like a ladder, moving back when weight is applied and removes the need for a hinge and springs. This is the aspect that took the longest to develop and enables you to sit in it and get comfortable immediately, rather than tweaking any levels. In fact the only thing you have to do is adjust the height of the seat via a small button on the underside of the seat. Without the levers and heavy leather padding, the chair looks extremely simple compared to some of the bulkier desk chairs. This is another great reason for using it in the home as it’s far less obtrusive if you need a decent desk chair and so far have been stuck with the standard options.  All in all it’s a stunning design on first appearances and won’t look out of place in any interior, mixed with other contemporary pieces of antique furniture.
Previously used to a larger leather chair myself, the Herman Miller Setu Chair did take a few days to get used to and after a couple of hours each day I was wondering if I’d made the wrong decision and it had cost be heavily. However, after you’ve made it through that period you’ll never want to go back to anything else. It’s not classified as a true ergonomic chair but I certainly notice a difference with the backache I regularly suffered with it’s predecessors. It’s a thing of the past and I also don’t have to mess about with finding the right position every time I sit in it. The kinematic spine does the hardwork and if I lean back slightly, the back of the chair follows me rather than the whole thing tilting.
9 months on since I was first greeting with my own Herman Miller Setu Task Chair, it still looks like it did the day it arrived and I’m now a real advocate. Many people may be worried about keeping white arms/plastic clean, however a quick wipe with a damp sponge will remove any marks so it really isn’t an issue. Lumbar support is fantastic and the mesh is comfortable as it allows air to circulate under your clothes unless leather chairs that end up sticking to your skin after a long day.
The final point to note is the weight of the chair itself why I was surprised at when it first arrived. It is incredibly light, not feather-weight my any means, but compared to other office or desk chairs you’ll notice a difference. You can pick it up easily to move around rather than dragging it across the floor and even though it’s light, it feels extremely sturdy with no wobbly arms or movement in the height piston.

If you’re now convinced that it’s the chair for you after reading the review, or are simply intrigued as to how much it really differs from others, the first step is to try one out. As previously mentioned, John Lewis is the largest department store that sells it so head into your local store to give it a test run. The next step is to brace yourself for the price, as many retailers sell the Setu Task Chair for around £650.
Don’t be put off by this – first of all it is great value for money and isn’t ‘expensive’ if you look at it in comparison to ergonomic chairs that can run into the thousands. Secondly, and most importantly, you don’t have to pay this much for the chair. I was able to pick one up for just under £380 and there are quite a few retailers online such as New Image Office Design which offer the ability to pick your own colours and negotiate a deal. As it is strictly an office chair, many of the companies will be business focused but still deal with the public. You’ll probably have to wait several weeks if you order it from scratch, but it’s worth the wait and you can feel happy that it’s been made by hand just for you. There aren’t many pieces of contemporary furniture that can be customized in such a way and for such a good price. If you value your back and work a lot at a desk from home, treat yourself and I guarantee it’ll be one of the best investments you’ve ever made.

About the author - Chris Perrett

Chris is the Editor of the Savvy Saver Magazine here at iLikeOffers.co.uk. With a keen eye for bargains, Chris helps to hunt down the biggest savings at stores across the UK and to bring you tips and advice on how to save money in your day-to-day life.